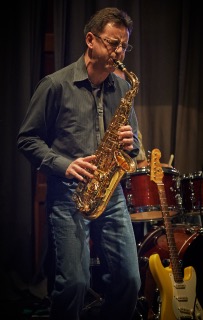 Claudio Fantinato is one of those gifted individuals born with a natural mechanical aptitude. At the age of 10 he took apart and reassembled his first guitar. This was the dawn of a musical career that involved not only performing but also the repairing of thousands of brass and woodwind instruments.

Claudio began playing the saxophone at the age of 13 and excelled in local school band programs while growing up in the forest industry based community of Port Alberni on the West Coast of Vancouver Island. At music festivals across Canada he was constantly chosen by adjudicators to be a member of the all-star bands that spotlighted up-and-coming young talent.

Before acquiring a driver’s license Claudio was already rebuilding automobile engines. At the age of 16 he re-padded his first saxophone. The reason was he’d shipped his Selmer Mk VI alto to a big-city music store for an overhaul and when he got it back it wouldn’t play. Using repair manuals from the school library, Claudio soon had the instrument playing in tip-top form.

After graduating from high school Claudio went on to study music in Nanaimo at Malaspina College, now known as Vancouver Island University. Winning a Canada Council Grant for music and a Berklee scholarship, he continued his studies at Berklee College of Music in Boston, Massachusetts.

Returning to Canada, Claudio settled in the city of Vancouver in British Columbia. He entered the food manufacturing business for 10 years and quickly excelled in management, food production/packaging equipment, manufacturing and design. He worked hands on with trade’s people including welders, electricians, millwrights, and also CNC (Computer Numerical Control) machine shop equipment. It was a virtual training ground in multiple trades.

For the past 30 years Claudio has continued to play the saxophone part time, performing with local groups and musical theatre orchestras. He has enjoyed sitting in with some of Canada’s finest jazz musicians, citing a highlight gig as playing for a private gathering for Oprah Winfrey on BC business magnate Jimmy Pattison’s private yacht. Not too often one gets to meet two of North America’s richest people in the same day. During these years Claudio continued repairing musical instruments as a hobby, ultimately turning the leisure pursuit into a business venture under the moniker High Note Musical Services centered in the Vancouver Island community of Qualicum Beach.

In 2004, the Juno Award-winning saxophonist Phil Dwyer moved back to his hometown of Qualicum Beach after an illustrious worldwide career as one of Canada’s finest jazz musicians. Claudio and Phil were friends during their teen-age years and the two ardently began discussing the possibility of designing and developing a new saxophone. This led to a business venture and partnership named SeaWind Musical Instruments Inc. With Claudio in charge of the hands-on assembly of the new instruments, the beautifully designed horns are now marketed as the Phil Dwyer Edition alto and tenor saxophones.